In 1979 British Mountaineer Pete Boardman stated that the walk to the base of Kanchenjunga was the most beautiful he had ever undertaken. It is a strong contender for “The most beautiful walk in the world.” The word Kanchenjunga comes from old Tibetan and translates to “Five treasures of snow.” Local inhabitants have worshiped these holy mountains for as long as their stories go back in time. The five treasures are Gold, Silver, Precious Stones, Grain, and Holy Scriptures, referring to the five individual peaks of the Kangchendzonga Himal range.

Kanchenjunga lies on the far eastern side of Nepal, near the border with Sikkim, a tiny Himalayan state in the north-eastern part of India. It is the 3rd highest mountain in the world with an elevation of 8586 meters. Although first climbed in 1955 is was not until the late 1980’s that restrictions were lifted to allow trekkers rather than just mountaineering expeditions to approach Kanchenjunga from Nepal. Special, restricted permits are needed to walk here as you traverse pristine conservation areas. Solo hiking is not allowed and local guides must be employed to obtain permits.

A trek to Kanchenjunga is an unforgettable adventure into the heart of the Himalaya where the scale of both mountain and valley is difficult to comprehend. The peaks are visible in the distance for days, floating like ships on a distant sea. Trekking does not get any better than this. When Douglas Freshfield came here in 1899 he was awe-struck by the sheer scale of it all, which left an impression of “stupendous vastness”. All around, massive yet elegant peaks thrust up into the Himalayan blue, then suddenly the immense north wall of Kanchenjunga bursts into view, with a shelf of grass spilling down the slope towards its base. This is Pangpema (5140m), one of Nepal’s most treasured sites.

Kanchenjunga is classed as a demanding trek due to its remoteness and altitude. There are no crowds and you will meet few other trekkers. Participants should be physically fit enough to walk for at least 6 hours a day. However, because the government is emphasizing tourism in the area as part of the Great Himalayan Trail you can now walk Kanchenjunga on a tea-house basis. Staying at local accommodation, assists locals with augmenting their incomes 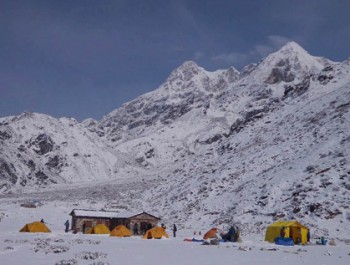 Kanchenjunga North Base Camp with my two sons Sam 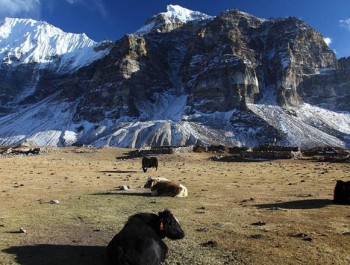 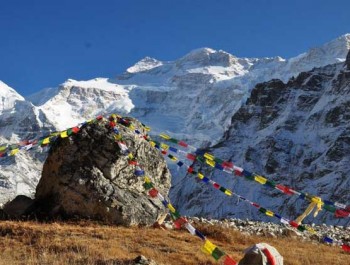